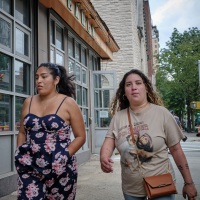 I had an intuition the other day that has stayed with me (so far). At the risk of boring you picture-lovers out there with dry theory, here’s a brief essay on my realization.

I grew up in the ’60s and ’70s. I first became serious about photography around age 12 in 1969, purchasing a Voigtländer Vito C second-hand, and I bought my first SLR in 1970 (a Minolta SR-T 101). In those days, serious photography meant black and white. Color was happening, of course –  Pete Turner and Jay Maisel were turning out brilliant color already in the late ’60s, as were Ernst Haas, Saul Leiter and too many others to name here. But for street photographers, aspiring photojournalists, acolytes of Cartier-Bresson and Robert Frank, it had to be black and white.

One simple reason for this, of course, was technology: I could develop B&W film in my parents’ bathroom whereas color was a bit too tetchy. Another was cost. I could afford on pocket money and odd jobs to buy Tri-X film in bulk and the chemicals and paper I needed to develop and print B&W. Color was mostly out of reach except for photomat-quality 3½x5 prints.

And so, unsurprisingly, my taste and skill in photography were driven by the constraints I was forced to work within and attempt to stretch the boundaries of. So when, towards the turn of the century, I switched to digital photography it seemed quite natural to me to convert most of my photographs to black & white. When I bring up a chip-ful of new images on the screen in Lightroom and start “developing” them, one of the first questions I ask myself is whether the color is an important contributor to what’s going on in the image. In many cases, it’s not and one of the first things I do is convert to B&W. Color has to prove its right to remain. Anyone who’s been coming to this site for any length of time will have noticed there’s an awful lot of B&W street photography of a certain type (and I’ve been posting pictures here almost every day for over 10 years now).

But here was my insight. Color is no longer a constraint of the medium. My camera takes color pictures. For me to convert them to B&W because that looks right to me only shows how my tastes were frozen decades ago when that was a real constraint. In fact, it’s really an affectation in this day and age and a dead giveaway of my age and the derivativeness of my work.

A great example of someone who broke with this way of seeing is Alex Webb. In the introduction to his magnificent volume, The Suffering of Light, we learn how he grew tired of black and white New York street photography and discovered light and color in Haiti.

So look for more color here going forward. That’s not to say there won’t still be black and white images here when that makes sense to me, but more and more I’ll be attempting to justify the conversion to B&W rather than justifying the retention of the color that’s natural to the image captured by my sensor.

Of course, everyone’s entitled to their own taste and their own style so my Damascene conversion may not be yours. But I’d be interested in your thoughts.