Photo+ Expo caters to its avid corps of late-middle-aged guys, still imagining their glamour photographers. Rare is the major booth without a model for the guys to photograph, demonstrating the superiority of someones, lights, lenses or cameras. In more recent years, and particularly since #timesup, the models are less and less scantily clad (that is to say, more clad). Grabbed this shot passing by with the test lens mentioned in the previous post. 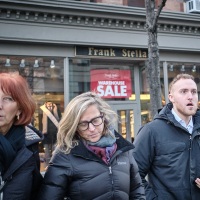