All images copyright by Adam Isler, © 1968-2023, all rights reserved (unless otherwise noted)

Been here about 4 months, now. This is the first time I’ve found Harry Potter-related consulting services. I hope that doesn’t mean there are Dementors in the area. I’ll have to lay in a stock of chocolate.

The plaque says, “Addressing the Statue,” and notes that while some love the historic statue, others abhor the clear subservient stance of the Native and African American.

In fact, the plaque does not so much address the statue’s problematic nature as leverage it to invite visitors to enter the museum “to learn more,” one of the natural long-term outcomes of Ronald Reagan’s charge to mediate everything in the marketplace.

A few months ago the statue was surrounded by stanchions to keep anti-racists at bay. Evidently the Museum has calculated that zealousness to have abated.

I’ve passed by this almost daily for the last year without noticing it. Goodman is a martyr of the Freedom Rides of the early ’60s.

Andrew Goodman was born and raised on the Upper West Side of New York City, at 161 West 86 Street, the middle of three sons of Robert and Carolyn Goodman, of Jewish heritage. His family and community were steeped in intellectual and socially progressive activism and were devoted to social justice. An activist at an early age, Goodman graduated from the progressive Walden School; Walden was said to have had a strongly formative influence on his outlook. He attended the Honors Program at the University of Wisconsin–Madison for a semester but withdrew after falling ill with pneumonia.

Goodman enrolled at Queens College, New York City, where he was a friend and classmate of Paul Simon. With his brief experience as an off-Broadway actor, he originally planned to study drama, but switched to anthropology. Goodman’s growing interest in anthropology seemed to parallel his increasing political seriousness.

In 1964, Goodman volunteered along with fellow activist Mickey Schwerner to work on the “Freedom Summer” project of the Congress of Racial Equality (CORE) to register blacks to vote in Mississippi. Having protested U.S. President Lyndon Johnson’s presence at the opening of that year’s World’s Fair, Goodman left New York to train and develop civil rights strategies at Western College for Women (now part of Miami University) in Oxford, Ohio. In mid-June, Goodman joined Schwerner in Meridian, Mississippi, where the latter was designated head of the field office. They worked on registering blacks in rural areas to vote.

The Mississippi State Sovereignty Commission was strongly opposed to integration and civil rights. It paid spies to identify citizens suspected of activism, especially northerners who entered the state. The records opened by court order in 1998 also revealed the state’s deep complicity in the murders of three civil rights workers at Philadelphia, Mississippi, because its investigator A.L. Hopkins passed on information about the workers, including the car license number of a new civil rights worker to the commission. Records showed the commission passed the information on to the Sheriff of Neshoba County, who was implicated in the murders.[3]

Schwerner had been working closely with an assistant James Chaney, also a civil rights activist in Meridian. On the morning of June 21, 1964, the three men set out for Philadelphia, Neshoba County, where they were to investigate the recent burning of Mount Zion Methodist Church, a black church that had agreed to be a site for a Religion School for education and voter registration. 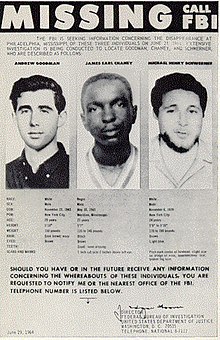 Missing persons poster created by the FBI in 1964, shows the photographs of Andrew Goodman, James Chaney, and Michael Schwerner.

On their return to Meridian, the three men were stopped and arrested by Deputy Sheriff Cecil Price for allegedly driving 35 miles over the 30-mile-per-hour speed limit. The trio was taken to the jail in Neshoba County where Chaney was booked for speeding, while Schwerner and Goodman were booked “for investigation”. After Chaney was fined $20, the three men were released and told to leave the county. Price followed them on state hwy 19 to the county line, then turned around at approximately 10:30 p.m. On their way back to Meridian, the three young men were stopped by patrol lights and two carloads of KKK members and taken to a remote rural road. The men approached their car, then shot and killed Schwerner, then Goodman, and finally Chaney.